A talk by Kevin Smith of KPS Roses

The Societys’ first speaker of the year was Kevin Smith of KPS roses, a supplier of roses for Peter Beales and Pococks Roses from Hampshire and Cornwall. Kevin worked at Peter Beales from the age of 14 years for many years learning the trade. He now has his own business and rents several hundred acres on the Sotterley estate growing roses from rootstocks, of all different types depending on what is required from the retailers. The rootstocks come from Holland and are mainly of the variety Laxa. They are planted at the beginning of the year and grown on and then after 4 months are budded with the variety of the rose that is desired. If they grow on a single shoot this is cut down to encourage side shoots to get a balanced plant.

Come September they are cut down as by then they could be 5 ft tall. In October they are dug up by hand with the exception of the very long Tap root which is cut off with a tractor as it would be difficult to remove by hand. They are then potted on and any suckers removed and sent to Peter Beales and other rose growers in November.

A question often asked is the difference between a Climber and a Rambler… A rambler usually has smaller flowers, lax growth and only one flowering and need little pruning, a Climber has larger flowers and is repeat flowering if deadheaded, its stems tend to be stiffer and more prone to breaking if trying to train them, all roses need a high potash feed to encourage flowering.

Pruning of roses need not be scientific, but prune out Dead Dying and Diseased shoots and allow plenty of air to circulate. Plants maybe container grown or containerised, what ever it is important to ensure a pot full of roots before planting in the garden. They need to be planted deep enough to cover the graft, any suckers that occur below the graft should be taken off with a knife or secateurs close to the stem. Main problems are Black Spot where good husbandry is important with sprays being available though resistance can occur. Greenfly is the other big problem, also sprays available , left for the bluetits or squashed. If planting a rose where one has been before, to prevent rose sickness, dig out and add plenty of new compost, plant in a cardboard box, or try Micorrhyzal fungus. 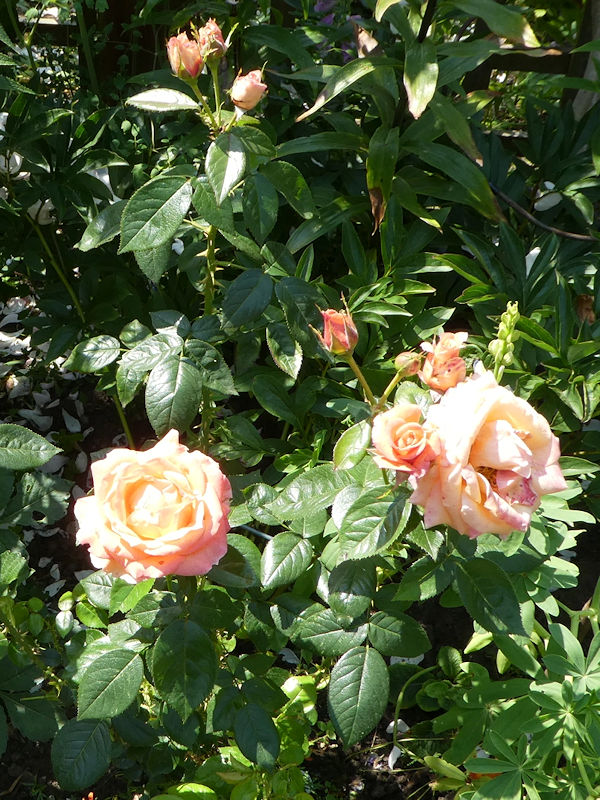 We would like to say a big thank you to Sheila who has done an amazing job keeping our website up to date in the past eighteen months.  We wish her well as she moves on to pastures new.  From January this year Debbie will be taking on the role as Webmaster.  For website queries please get in touch with her through the contact form on our Get In Touch page.

It is with great sadness that one of our staunchest members have died. Our sympathies go to his family and partner Marion.

One of our members has 2 large allotments at St Margaret Road site in Lowestoft which he shared with his late mother and her partner. He has tried to keep them going but is finding it difficult on his own. He finds gardening very therapeutic and having suffered from cancer himself he wondered if other members who have had similar experiences could join him on his allotments where they could share experiences and socialise together. Without a team to help him he will have to give up the allotments but feels it would be beneficial to all concerned to work together. For more information please complete the contact form.

It has been agreed by both the members and the committee that the membership fee will increase to £10 per annum, In order to get good speakers we need to increase our income, speakers costs have also increased as have their travelling costs. The entrance fee will remain at £1.00 with first time guest free of charge.